Their names were Claude Geisel and Floyd Schlitt and they called their company Geisel Manufacturing.

They first worked out of Claude Geisel's basement at 449 9th Street, Elyria, Ohio. They sold and installed a gas conversion burners which they had designed and patented. It was called the Glo-Cone Gas Conversion Burner.

Around 1944 business demanded they upgrade their operations to full time. They rented two side-by-side stores on the corner of Broad St. and West Ave. in Elyria. One store was used for the manufacturing facility, the other for the office.

After the war business was booming with two salesmen working full time. One was named Bill Engelland.

The cost to install a new Geisel Glo-Cone gas conversion burner was $165.00 complete. Out of that the salesman received $20.00. The installer received $17.50 ($22.50 if out of Lorain County) The Glo-Cone conversion burners were very popular because they continued to heat even if the power to the home went out, which at that time happened often. 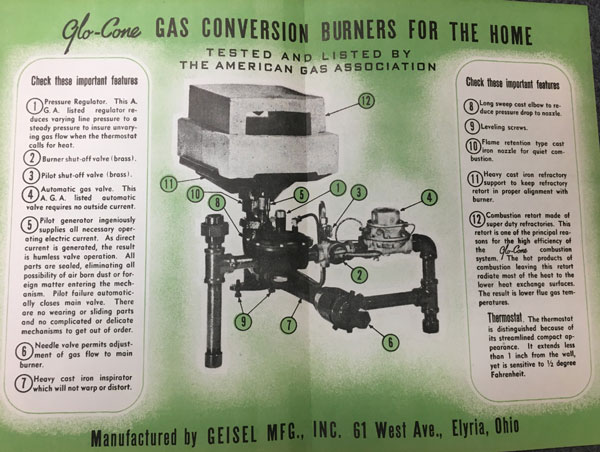 In the 1950's Geisel Manufacturing started installing forced air furnaces. The first brand sold was Luxaire, which were made in Elyria, Ohio. They also installed the Herbster combination furnace and clothes dryer.

When Claude Geisel retired in 1953, (He died in 1959) Floyd Schlitt took over the business.

In 1954, Geisel Manufacturing installed 800 conversion burners. They also had another dealer in Denver, Colorado.

In the late 1950's Geisel Manufacturing moved to their present location, 633 W. Broad St. Elyria so they could have their offices and manufacturing facilities in one building. The building had formerly housed a dry cleaner and was used as a furniture warehouse. The second floor used to have a nightclub in it. The building was rented from Milt Ardman who owned Elyria Furniture on Broad St.

In 1960 Floyd Schlitt retired. (He died in Nobember 1963) Bill Engelland and Porter Messinger bought the business from Schlitt plus the lot to the west of their current location after a house was removed.

In the mid 1960's the company started to install central air conditioning systems. This was great because it gave the business year around sales. They also expanded their product line to include American Standard, FloCo Company and Bryant furnaces. At this time the company was installing approximately 200 furnaces per year. With the advent of forced air heating systems the demand for the conversion burners dropped off and Geisel quit manufacturing the Geisel Glo-Cone Conversion Burners. Over the life of the business, Geisel installed approximately 10,000 conversion burners in Lorain County.

When Porter Messinger died in 1974, Bill Engelland sold the business to Chuck Culberson who took over operations January 1st, 1975. Culberson had worked with the Carrier distributor in Cleveland prior to buying Geisel and he began selling the Carrier brand of heating and air conditioning products. His background was in the commercial engineering area and he expanded Geisel's business into the commercial and industrial markets.

Over the next 20 plus years, Geisel flourished under Culberson with a focus on consistent professionalism, customer-focused attitudes and empowering all Associates to do what's right. He made sure both the customers and Geisel's Associates have a higher level of satisfaction in a job well done. The results spoke for themselves as Geisel enjoyed many repeat and referral customers along the way.

In late 2018, Geisel was acquired by HomeServe, a company whose primary business is home warranty policies. Geisel was one of the first service/install contractors in the US acquired by HomeServe, but Geisel remained locally operated and their customers still saw the same distinct trucks on the streets and in their driveways. Andy Culberson transitioned into a Commercial Sales role and the day-to-day operations transitioned to an existing Geisel co-worker with Matt Hedberg being named General Manager.